Everything we learned from Threado Community Hour Episode 3

Learnings from the third episode of Threado Community Hour featuring Cherish Santoshi, the founder of Sawo Labs, and our very own Pramod Rao
No items found.

Imposter Syndrome kicks in if you have to compete and it goes away if you think you’re there to serve a purpose that only you can. And if you can find a niche that you’re good at, then you’ll be fine. - Cherish Santoshi

Threado Community Hour episode 3 is over and it was a pool of extremely well thought out ideas articulated as learnings that made a huge impact on us.

Cherish Santoshi took us on a ride on his journey from being a bright-eyed college kid with a knack for building communities, to becoming a renowned leader in the community space and winning CMX's best community manager of the year award. Of course, hosted by our very own Pramod Rao, the conversation was enlightening and insightful.

His community journey started when he was in college and back then he managed college groups and Google student groups. He went to become a community leader at big organizations like Amazon, HackerEarth (helped grow it from 3 to 5 million users), and later founded his own company and started a community called SAWO Labs.

Having built communities from scratch, Cherish said that it gave him two strong advantages in life. 1) He can always figure a way outside the deep end of the pool and 2) He keeps his inquisitive mind satiated with all the experiments he could do. After all, there’s no way of knowing what works and what doesn’t unless you’ve tried.

💬 On growing a community from scratch - the strategy and ideation -

💯 It’s a volume game, to be honest. So, the trick is to crack the first let’s say hundred or thousand members and that get’s the ball rolling. Try to figure out where your market lies. Where do they spend most of their time? Which resources do they refer to? Find a common ground that resonates both with you and the audience that you’re trying to serve. What Cherish did was sponsor every hackathon he could get his hands on and ask developers to check out his product. Give them ownership of the work and crowdsource ideas to build the product roadmap. Bringing ownership to the table builds an intrinsic connection between members and product, this is when the community starts shaping itself.

🧘 Communities always serve a purpose. Once that purpose is served, people often leave or stay dormant, that’s just a fact all community builders have to come face-to-face with. In community there’s the 90-9-1 rule in which out of 100, 90 will be lurkers, 9 would be adopters or active users of the product, and 1 would be an ardent fan. Of course, this is just an outline and entirely subjective, but the point is that most (if not all) communities are dominated by lurkers and you can’t force people to be a part of something that probably doesn’t serve a purpose to them anymore. So, the focus should be on engaging and interacting more with that handful of members who reciprocate with the community just as much as you do.

💬 On how to engage with inactive members in a community -

🧑‍🤝‍🧑 Communities are built around rituals. People always identify with communities naturally because everyone at some point in their lives belongs to or comes from a community. There’s always something that differentiates you from the crowd - be it gender, generation, religion, or interests, and depending on where you belong or what you identify with, there’s something that you do differently as compared to others. It’s a kind of ‘ritual’ that sets you apart from the others. If you’re able to introduce an event or cultivate a culture that’s different or unique, then people have something to come back to, something they won’t find anywhere else.

✌️ There always will be people out there who’re smarter than you. But the important thing is that there shouldn’t be any shame in admitting that to yourself. Imposter Syndrome kicks in if you have to compete and it goes away if you think you’re there to serve a purpose that only can. And if you can find a niche that you’re good at, then you’ll be fine. Think of it this way, you’re developing a skill that they don’t have to and if you’re making even the slightest of difference, in doing what you do, then you have nothing to worry about.

💬 On driving people to ask questions and stir conversations -

🗣️ Ask a whole lot of stupid questions. It’s very normal for people to feel conscious of themselves, and there’s usually a fear of being judged or getting laughed at. This fear can only be eliminated by making people feel comfortable in that environment. As a builder and a leader, you need to be able to break that stigma and lead by example. But at the same time, you also have to maintain the decorum within the community and make sure that the responses are respectful and positive.

💬 On how to make people stick to a platform -

🙂 You can’t force people to stick to a platform. In a pool of so many people doing their own thing, you can’t expect everyone to be on the same platform - some might be on Slack, and others on Discord. And in community, early on, there’s a lot of importance that’s given to platforms or tools that are being used. Platforms do not serve a purpose, communities do. If what a community has to offer is of value to me, I will definitely be a part of that community regardless of which platform it’s on. It’s hard for people to stick to a platform that doesn’t serve a purpose for them or no longer is of interest to them. Rather the focus should be on adding value to the community and everything else should be secondary.

🤷 Sometimes communities are transactional, but there’s nothing wrong with that. Oftentimes people come to communities seeking a few answers and then leave. The important thing is to try and engage in the first few days of them joining, get them to do something in the community. If that doesn’t work out, give them the support they were looking for and maybe try reaching out to everyone once in a while either to just say hello or ask them to engage with something, that’s on you. As a result of this, although there’s no guaranteeing it, chances are that they will return to your community whenever they need something else and in the long run, might even become helpers or active contributors. That’s good enough.

💬 On how to deal with noise in a community -

️☯ Noise in the community is a ‘bitter-sweet’ metric that can go both ways. It can help keep the community engaged and keep the conversation going when there’s nothing else going on, but on the flip side, things can go sideways and your community can derail overnight. This is why moderation is necessary but there’s a line between healthy noise and not-so-healthy noise that needs to be understood by the ones who run the community. It also depends on the stage at which your community or your company is. If it’s a relatively new community, things aren’t high stakes, so any kind of noise is good. But the same cannot be said for a larger organization where a lot of things need to be well moderated and under control.

🥅 KPIs depend on the goals that a company has in the long term. Again, taking into account a scenario where revenue isn’t the main gaols, you have to ask yourself what the next eventful strategy or metric is around which you can quantify the success of your community. If user review is what matters to your company's product, then that should be at the forefront of your strategies. It completely depends on where the company’s headed and communities are often built to serve a purpose for the community. The north-star metric for a community is objective and is influenced by what the company expects from the community, and how your leadership dictates it.

As always, the peer-to-peer breakout sessions were a great way for audiences to network and get to share their experiences. People talked about their communities and what kind of problems they are facing with managing them. Witty conversations, humor, and insights - the networking sessions never fail to catalyze an impact.

Where are we headed?

With yet another episode of Threado Community Hour coming to an end, the momentum has been rewarding for us, as well for those who take the time out of their day to learn and grow with this initiative. Thank you for being a part of this, and in case you missed it, join us in the next episode.

Stay tuned for the announcement! 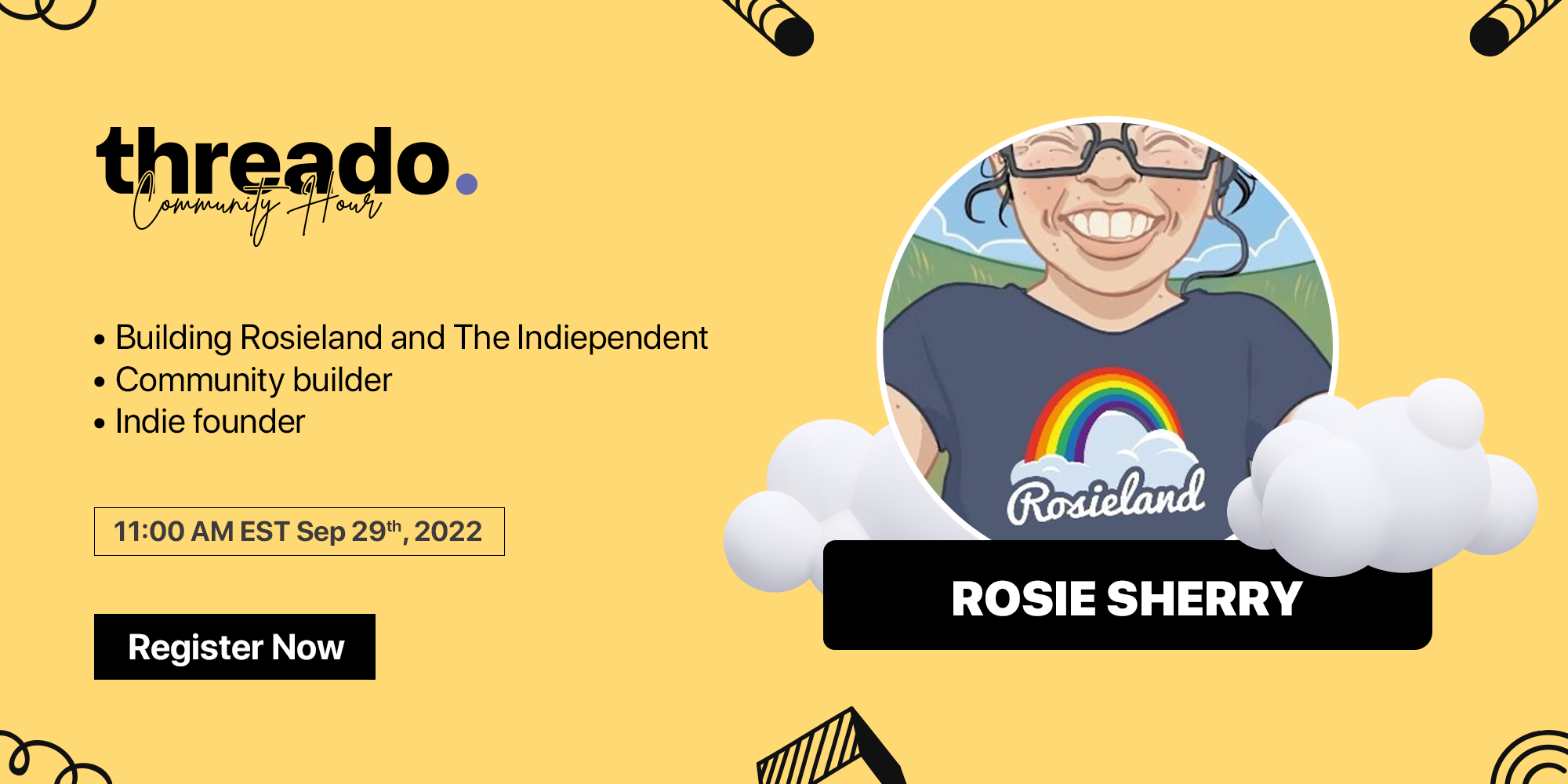 Learnings from the eighth episode of Threado Community Hour featuring Rosie Sherry, and our very own Sharath Kuruganty. 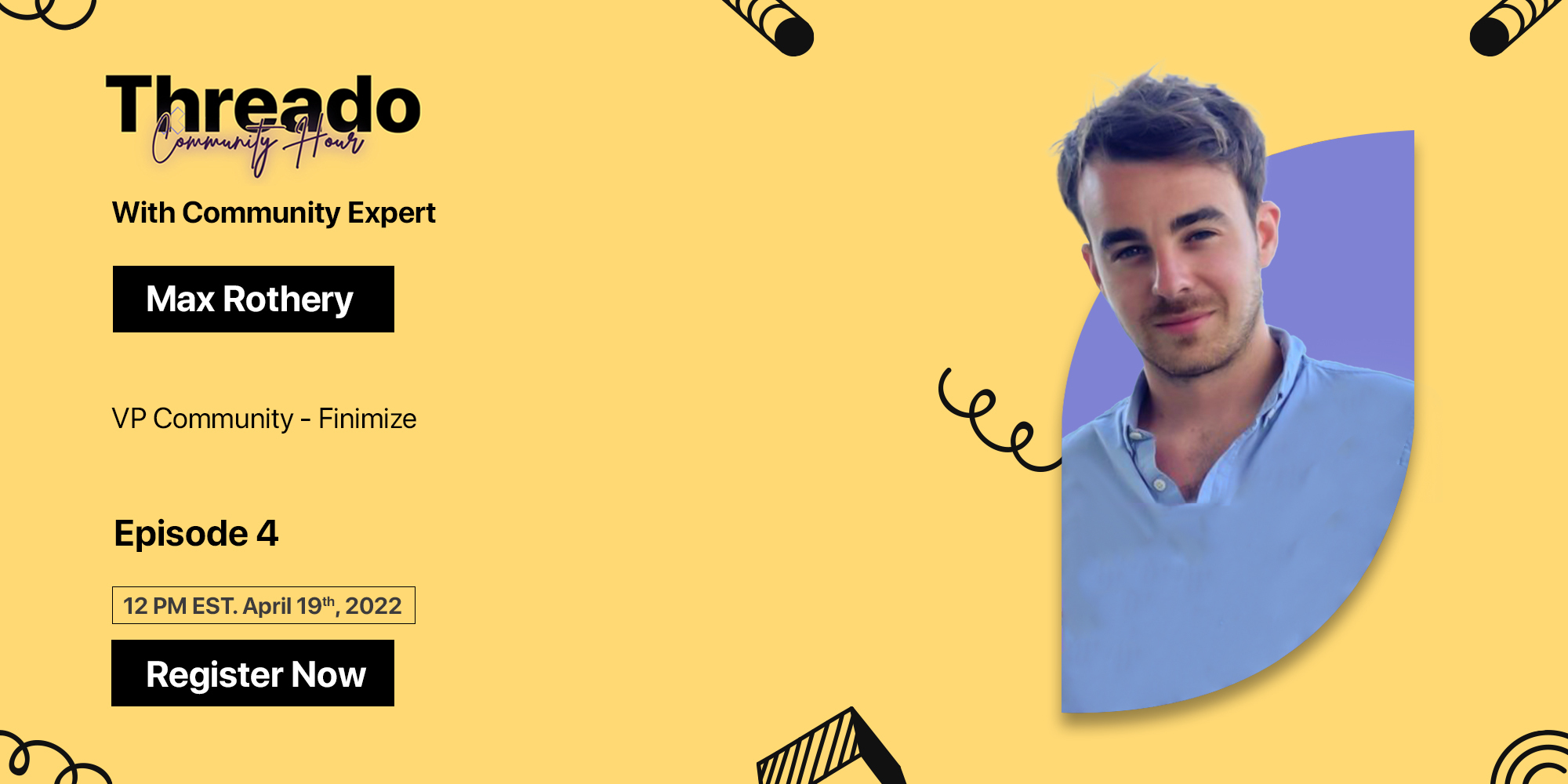 Learnings from the fourth episode of Threado Community Hour featuring Max Rothery of Finimize, and our very own Pramod Rao. 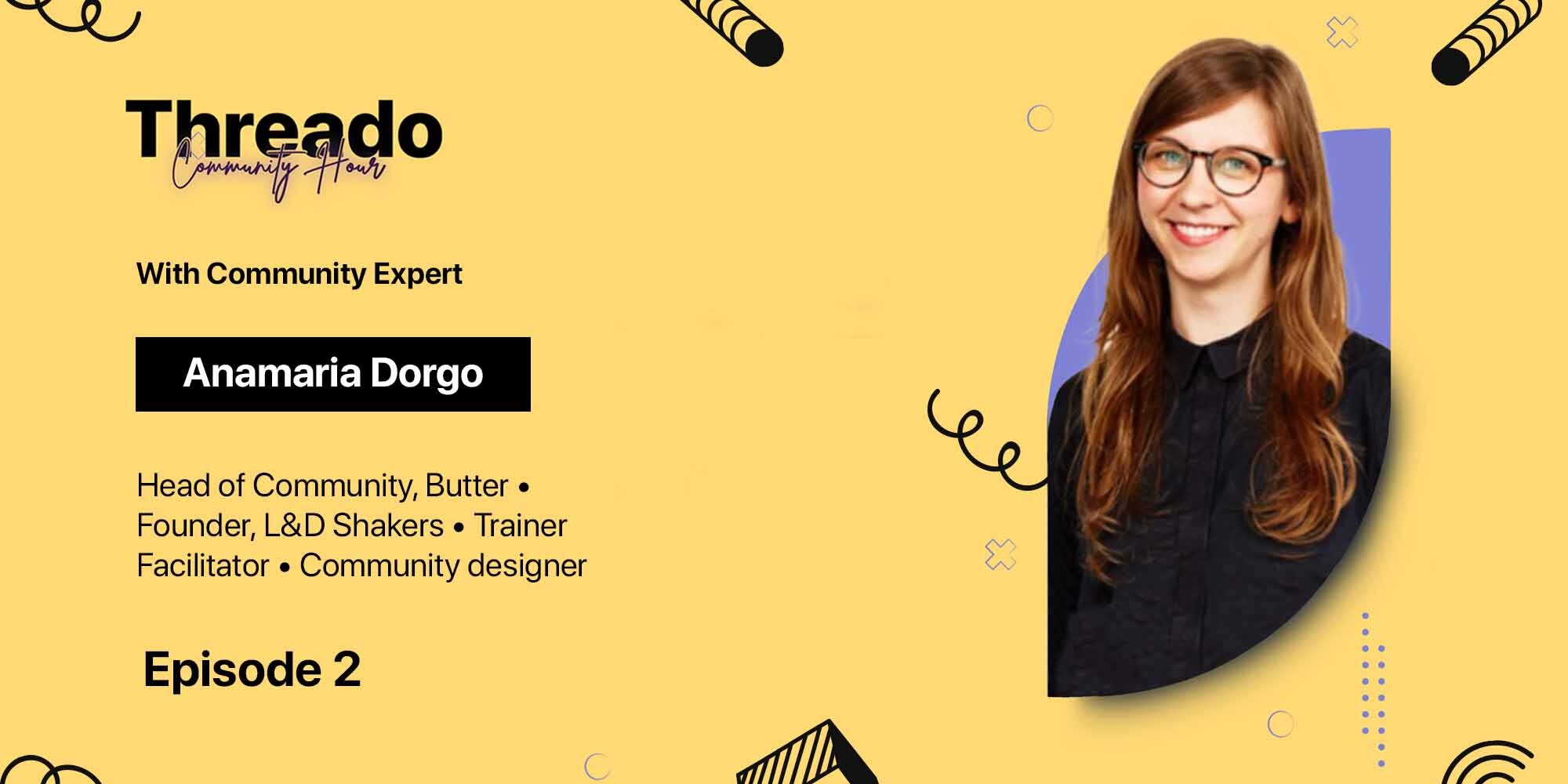 Everything we learned from Threado Community Hour Episode 2

Learnings from the second episode of Threado Community Hour featuring Anamaria Dorgo of Butter, and our very own Pramod Rao.