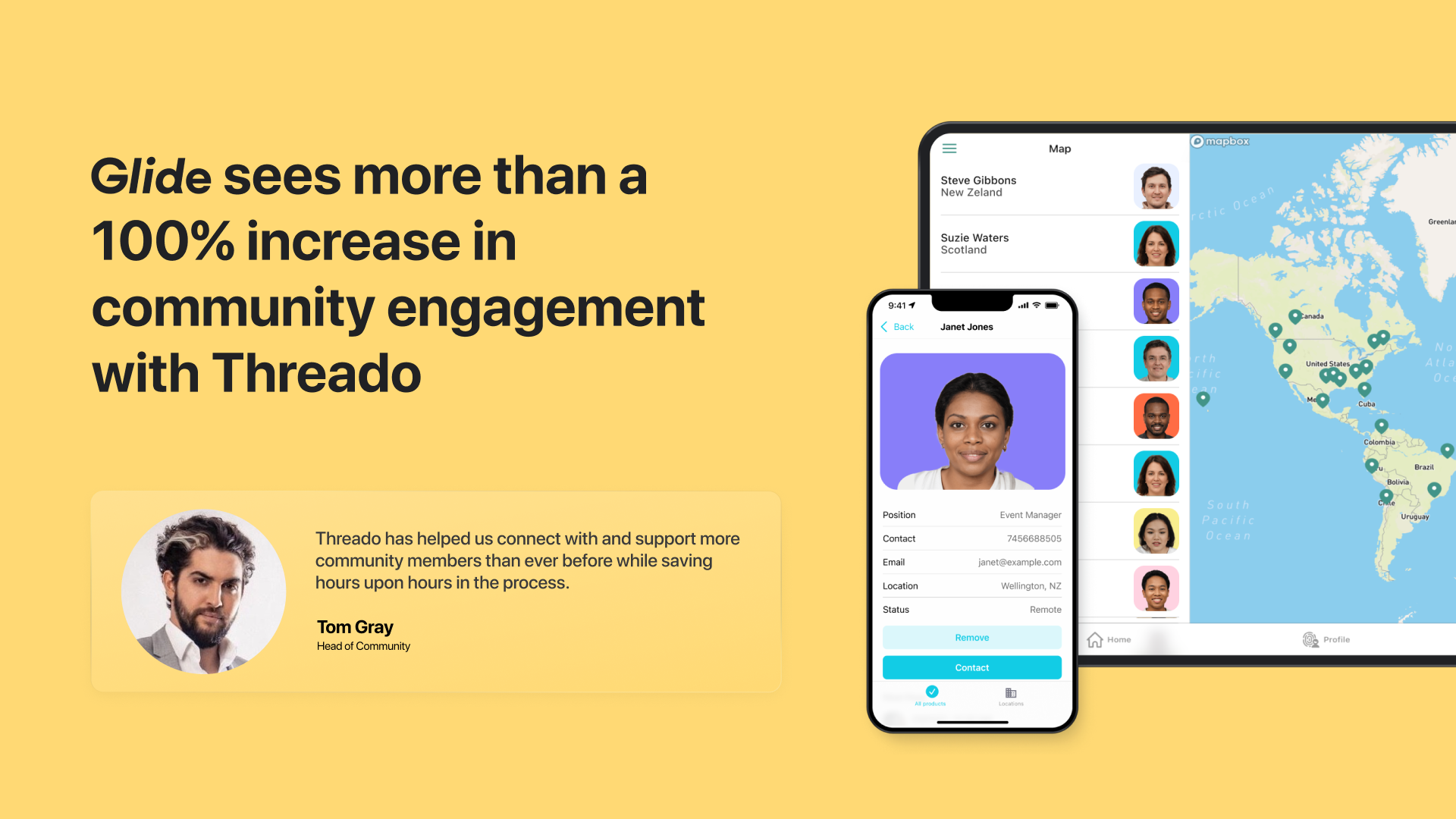 Glide is on a mission to empower over a billion no-code creators by 2030 through advocacy and community.
‍
They were in need of a solution that could help them drive engagement at scale.

Threado proved to be more than what Glide was looking for and the results speak for itself.

Engagement doubled and activation up by more than 50%

More than 200 members are weekly engaged

"Threado has helped us connect with and support more community members than ever before while saving hours upon hours in the process. We now have the ability to better understand the needs of newcomers and support our advocates who teach and share Glide with the world." - Tom Gray, Head of Community at Glide

Data can be glamorous too

The founders couldn’t make peace with the idea that in a world where we’ve seen technological revelations undreamt of, why is making apps so daunting? The idea with Glide was to make building apps as easy as using a phone. The biggest gap between data and action is the inability to go from the first to the latter without knowing how to code. This was a gap they wanted to bridge.

While working at Xamarin, which was later acquired by Microsoft - David Siegel, Jason Smith, Antonio García Aprea, and Mark Probst - realized that building mobile apps shouldn’t be as hard as it is. Mobile apps have become synonymous with mainstream technology. Still, ironically, most companies avoid having a mobile app strategy precisely because of how exhaustive this process can be from planning and strategizing to coordination and even budgeting.

A community of Gliders

Since the beginning, Glide has been grounded in the idea of community-led growth and how detrimental or prominent the presence of a community can be for the success of a company. Glide realized that when you’re building a solution for the people, it’s not just about solving a problem but also about identifying avenues that can help improve that solution. And there’s really no better way to align the product with the people than fostering a community.

There’s a 12,000+ strong community of Gliders on Discourse where they engage in everything from product updates, tutorials, and announcements to project showcases, resources, and templates. Their use of badges adds a level of motivation for improving engagement in the community.

As the community grew, it became harder to stay on top of everything. 12,000+ members engaging in 1000s of discussions across 10+ categories can be extremely difficult to manage at once. There are only so many hours in a day and although community managers are superheroes, they’re still not omnipresent.

One of the biggest north stars for Glide as an organization is to empower over a billion no-code creators by 2030. And a driving factor in achieving such an ambitious goal is community advocacy. For Glide, the success of community-led growth is significantly reliant on its ability to elevate users into becoming superusers. There’s nothing stronger than the power of sharing and this mission to disseminate Glide globally is only possible if they’re able to drive Ambassador and  Expert programs at scale.

When you’re down in the trenches, you need something that gives you an oversight of what’s really going on in the community. When you’re putting in the tremendous effort but still have a cloud of doubt about what worked and what didn’t, how do you quantify those efforts into results? The process of building communities is laden with hundreds of workflows that need to be orchestrated together to make sure everything works in tandem.

Threado’s capability to automate critical tasks is what knocked it out of the park for Glide. The purpose that it serves aligned almost impeccably with the ambitions Glide has with its community.

“Community workflows have been a huge game changer for us,” said Tom when asked how Threado has been able to help them with their community-building challenges. "Our goal right now is to grow advocacy. We want to empower more individuals to educate and share Glide with the world. The workflows at scale have helped drive more engagement. And we can support more individuals to reach new levels of advocacy.”

Diving deeper into workflows, let’s see how each automation helped Glide move closer to its goal.

A workflow to onboard new members is crucial. It sets the stage up for a member to be engaged right from the beginning and there’s a usually golden period that persists between curiosity and disinterest. Making use of that to guide and encourage new members is often a surefire way to drive engagement early on.

“The first touch is a great opportunity for the community team to learn about the needs of newcomers and help them connect with other members of the community,” said Tom insinuating the importance of seamless onboarding. “Not just for new members, we’ve also automated onboarding of our super users into our Ambassador and Expert programs.”

‍So far, over 400 members have been onboarded using automated messages and workflows.

“You want to spend your time on things that have a high impact—building meaningful relationships, supporting newbies, growing advocacy, and so on. Community builders know this, but finding the right tools is one of our biggest challenges,” said Tom.

Another noteworthy workflow that’s quite overlooked is appreciating members who’ve constantly kept the community experience delightful for everyone else.

Citing how helpful this has been for them, Tom said, “Expressing gratitude to valuable members has had a prominent impact and helps drive a sense of significance that their contributions don’t go unnoticed.”

“Reactivating dormant users isn’t something we were able to do until Threado came along," said Tom.

Inactive users make up a hefty percentage of members of a community and figuring out a way to reach them can play a vital role in activating the community.

"With this workflow, we noticed that people who don’t feel comfortable posting in the community would rather open up to direct messages. We’d receive things like, “Hey, I’m facing this roadblock”, “I’m not being able to solve this” or “Who can I speak to about this? … ”. As a consequence we can better understand and support them,” explained Tom.

Over 200 dormant members have been reached out through automated workflows and it’s working wonders for them.

What came of it?

Having all these automation functions systematically, Glide is seeing a monumental change in the community.

With over 7000 messages and reactions being posted weekly, Glide is seeing more than a 100% increase in community engagement in about 3 months.

Key contributors toward a significant increase in community engagement -

All the efforts put into engagement and activation have contributed to an almost 50% increase in activation and an 86% increase in retention. Retention here is taken by observing members who were active even in their 6th week after joining the community.

Glide has saved more than 15 hours of manual work from sending over 2200 personalized messages to 900+ members. As of now, Glide sends a little over 200 automated messages weekly.

One of their short-term goals is to get 500+ reviews on G2 by the end of 2022 for which they have automation in place.

They also have workflows that make use of the tagging feature to help segregate and identify the members better. “Tags make it easy to slice and dice metrics. We have automations in place that tag Ambassadors or Experts. We can use those tags to monitor engagement at an individual level,” said Tom.

It’s a bright road ahead

Glide’s long-term community goals align perfectly with what Threado does. Advocacy is what they’re building towards and they’re already seeing how indispensable Threado can be for them a long way down the road. Based on Threado’s leaderboard metrics, Glide has over 200 Level 3 contributors who are being enrolled in superuser and advocacy programs, and more are enrolling as you’re reading this. As this number grows, Glide will inch closer to its mission to empower a billion users by 2030.

“We love the idea that Threado could soon become a one-stop-shop that pulls together all the elements that we need. Of course, you can argue, as would many of my counterparts, that the perfect community tool doesn’t exist. And rightfully so,” explained Tom. “It’s the ongoing challenge of all community builders to put human connections into numbers. But we feel the direction Threado is heading in proves itself as one of the leading community management tools available.”

Glide has been one of Threado’s earliest supporters and Tom has, in many ways, helped shape the product into where it stands today. Our mission to build an all-in-one solution for community builders wouldn’t be possible without our day ones. More than anything, we’re grateful.

Here’s to empowering a community of passionate no-coders together with Glide! 🤝

Curious to see how Threado can activate your community?