📈 Pitch - The community-driven product, deep-dive on Discord, Awards and more...

How is Pitch taking on Powerpoint, some resources from the community, and jobs alert!
No items found.

I'm Pramod, one of the Co-founders of Threado. Welcome to our weekly newsletter about everything community. 🤝

Safe to say, we are still not over the Diwali hype.

I like to think that festivals are the glue that holds people together. It is the time that reminds us to slow down and cherish the good things in life. It was the Diwali weekend in India. Like every year, the houses were lit up and gifts were exchanged. But what’s more beautiful is to see people coming back to their roots from far across the world to be a part of these celebrations. To me, it is this togetherness that makes the festival as magnificent as it is.

Such is the power of communities. Today, we have one such story for you. We will look at how building a strong community helped this startup to take on bigger giants in the industry.

Here's what we've curated for you in this edition:

🎮 Discord: Imagine a Place - A deep-dive case study on Discord

The future of work is remote.

Pitch.com is a collaborative presentation tool and an emerging unicorn in the making. The man behind this storm is a serial entrepreneur and investor - Christian Reber.

Christian founded Wunderlist, a cloud-based task management app in 2011. Microsoft saw Wunderlist as competition to its native app To-Do which offered similar competitive features. So, it went ahead and acquired Wunderlist in 2015 with plans to eventually shut it down. Microsoft continued operating Wunderlist longer than expected and finally shut it down in May 2020. Christian wanted to buy back Wunderlist from Microsoft and improvise the product to make it still available to the users, but it never went through.

Meanwhile, Christian was working on ramping up Pitch.com with his seven other co-founders. Back in 2018, Pitch was born out of a shared passion for creating well-crafted and delightful products. Christian and the team wanted to create something in line with what Figma, Canva, InVision had built, but for non-designers. That's where the idea of creating a collaborative presentation software was born.

"If you think presentations cannot enchant people, then you have never seen a really good one." - Guy Kawasaki

Pitch was up against three main giants - PowerPoint, Keynote & Google Slides. But even with these giants in the markets, some problems were unaddressed. Pitch was going to solve them.

"When we founded our company in January, Pitch really wasn’t much more than an idea. With Slack and Front transforming business communication, Airtable and Coda disrupting Excel, and Sketch and Framer on a mission to break Photoshop’s monopoly, we saw innovation and thoughtful design resetting expectations and reimagining the user experience of complex business software." - Christian Reber

After two years of immense effort and a year-long beta that included more than 25,000 teams, including those at Intercom, Grammarly, and Notion, Pitch finally opened up to everyone in October 2020. During their beta, they shipped 72 new features, 210 improvements, and 260 bug fixes.

Today Berlin-based Pitch has raised a total of $137.7M funding, with the latest one being an $85M in Series B round led by Lakestar and Tiger Global, joined by their existing investors Thrive Capital and Index Ventures.

Read the complete story of a community-driven collaborative product, that is taking over Powerpoint big time! 👇

A deep dive case study on Discord - a tool that's not just limited to communities but has the chance to be the metaverse’s natural social infrastructure. There are 19 million active servers on Discord, a growing number of which are not gaming related. While Discord is still considered for gamers, the team has attempted to broaden coverage, to compete with Slack and Microsoft Teams.

A bunch of Twitter users on iOS are starting to get access to a feature that makes it easy to search an individual user’s tweets. For those with access, when you navigate to a user’s profile, you’ll see a search icon in the top right corner of the screen on the user’s profile banner, next to the three-dot menu. Then, you can type in keywords to search the user’s tweets.

🎙️ How to keep localized communities buzzing with Dani Weinstein

🧵 How NFTs might change the hiring process - get hired and start working 60 seconds later: A thread by Greg Isenberg

Here's a bunch of amazing podcasts on specific community-related topics, by Anna Grigoryan. Check them out!

From imbalanced creator economics and poor security to centralised control and disgruntled communities — Web 2.0’s flaws have been on full display these past couple of months. Here are a couple of key concerns we can expect Web3 to take away 👇

"Since Web 3.0 is built on cryptographic primitives and often features open-source code, anyone can contribute to the project by reviewing code. This boosts security for users and turns transparency into a competitive advantage. The gains are not simply privacy-based but actually result in user value being protected."

"Web 3.0 fixes this, too, with greater transparency and censorship resistance thanks to the blockchain’s immutability. Decisions are made in the open via tools like Snapshot and are driven by the broader community. Governance happens on-chain, for everyone to see. There are no backroom deals or two-tiered justice systems (unless voted on, of course). It’s all community-driven, so participants can simply move on if they disagree with the direction or level of transparency."

"The Web 3.0 paradigm addresses these misaligned incentives by democratizing access and dissolving silos between creators and fans. Web 3.0’s monetization mechanisms for creators, like NFTs, digital payments, tokens and crowdfunding level the playing field in a creator-friendly way. Artists using platforms like glass.xyz have found that they can monetize their content through NFTs accompanied by an engaging live stream far better than they can by simply selling via a Web 2.0 model."

If you are eager to be a part of the founding team of an early-stage product-led startup, hop on to our ride! We're hiring for key roles. Check them out 👇

👩‍💼 Product Manager - looking for our Founding Product Manager who will own product value discovery, our product roadmap, work closely with our early partners and ship products that delight community builders.

✍️ Content Marketing Lead - who will own and shape the voice of Threado. Every interaction with our potential users (community builders) across platforms is an opportunity for us to delight them and add value. As a Content Marketing Lead, you will be deeply involved in delighting our users through engaging, entertaining, and educational content.

🕵️‍♂️ Senior Quality Assurance Engineer - a Sr. quality analyst with good QA experience and will be responsible for improving the overall quality of the platform by analysing business scenarios, edge cases and user experience.

👩‍💻 Senior Software Engineer - Frontend - a Senior ReactJS Developer who has experience in developing great UI experiences and is passionate about Frontend engineering.

That’s it for this week. If you liked our content, please do give us a shoutout and spread the word. 💌 🤟

Would love to hear your feedback and help you out with anything around Community Building. Feel free to write back. We read EVERY reply. 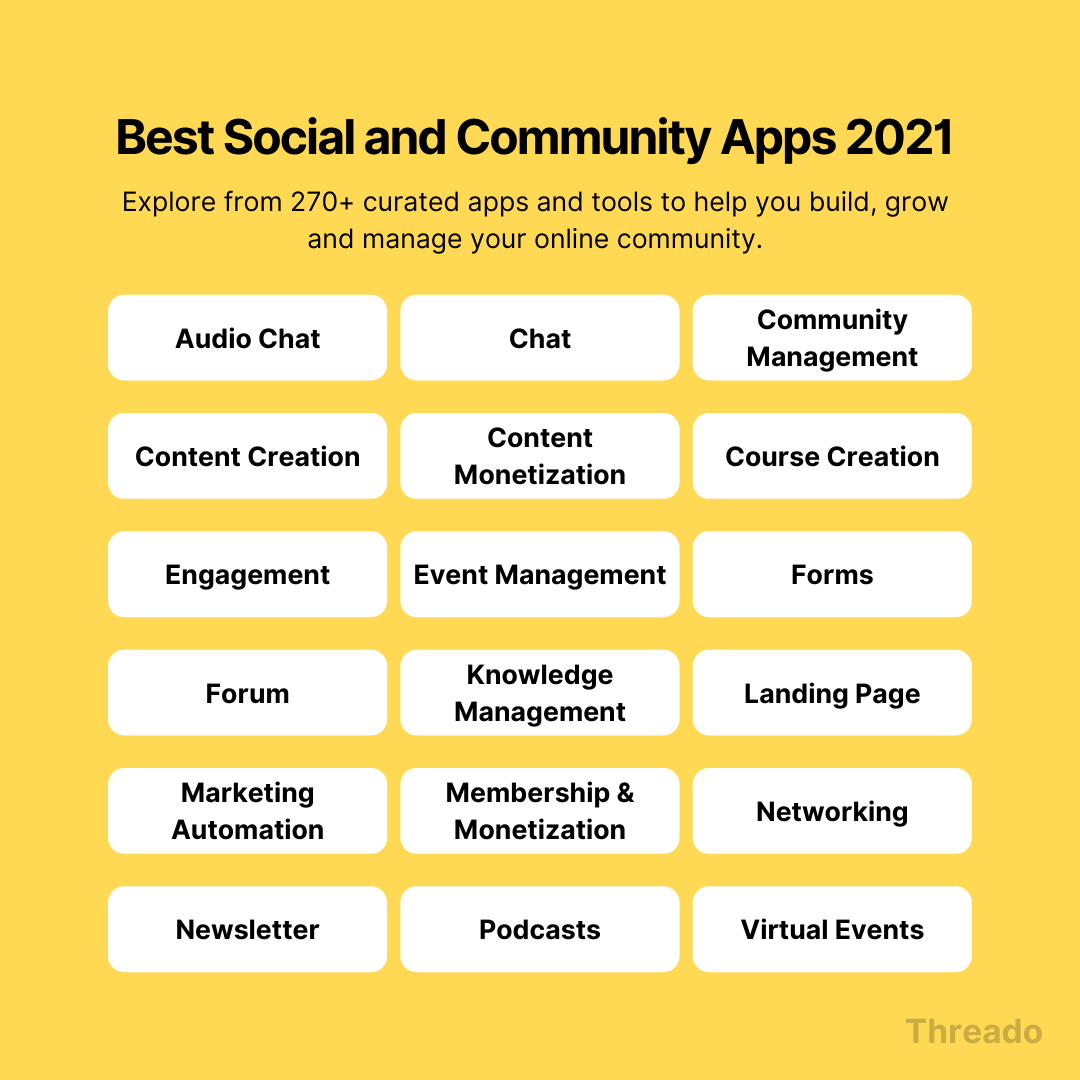 Welcome to our weekly newsletter about everything community. We are at 512 subscribers and growing! Explore more resources, how-to guides, interviews on CommunityHub by Threado! 👇

Welcome to the 62nd edition of Community Digest. Today, we talk about the growth journey of Bubble. You will also find curated community resources and updates.

We Want To Hear Your Verdict!

Welcome to the 54th edition of our newsletter. Today, we will talk about the growth journey of Braze.